OK guys, as most of you know, we get a good bit of activity  in our research area. Well, we have recently had some activity that has put a new spin on things.

My son has been telling us for weeks now that after we (Marty and i) go to bed,  something hits the side of the house then hits the roof right at his bedroom. His room is the only part of our home that doesn't have a fence around it. There is no tree anywhere near there so that ruled out anything jumping onto the house from the tree. I had also thought that it may be a stray cat going after the leftover dog food that is inside the fence. Marty set the trail cam up pointed in that direction. The first night, we caught nothing at all. The second night we had a strange white mist completely obscure the camera lens in one image in the next image there was nothing. This activity continued every night, yet we could not catch anything on the camera.

The weather is beginning to get warmer so our grandson is playing outside more. He wanted his pool filled, so Marty and  Chris got his pool out, cleaned it up and filled it with water.This pool sets just a few feet from where the night time noises happen.  The pool is on the inside of the fence and the noises are happening on the outside. The following few days were sunny and warm so our grandson was enjoying his pool. Every evening he would leave a few toys in the pool after he got through playing.One morning, Marty and I were outside on the porch, I looked over at the pool and most of the water was gone! The area around the pool was dry so we knew it wasn't a whole. And most of the toys had been taken out and placed near the pool on the patio. I immediately thought about the trail cam. It had been running! Marty took the card out and we went inside to load it on his computer. Something triggered it during the night, but there was nothing at all in the images. I could plainly see the pool, but the camera caught nothing. Now that's just strange in my book.
Posted by Carolina Cryptid Crew at 10:44 AM 1 comment:

These are some prints that we have recently found in our research area.
I have looked these up online and can't seem to find anything that compares to the size and shape.
I have shown these to a few avid hunters that can't tell me any more than "that is a big animal."

These prints measure 5 1/2 in length and 3 1/2 width.
Bear and cougar are not indigenous to our area. 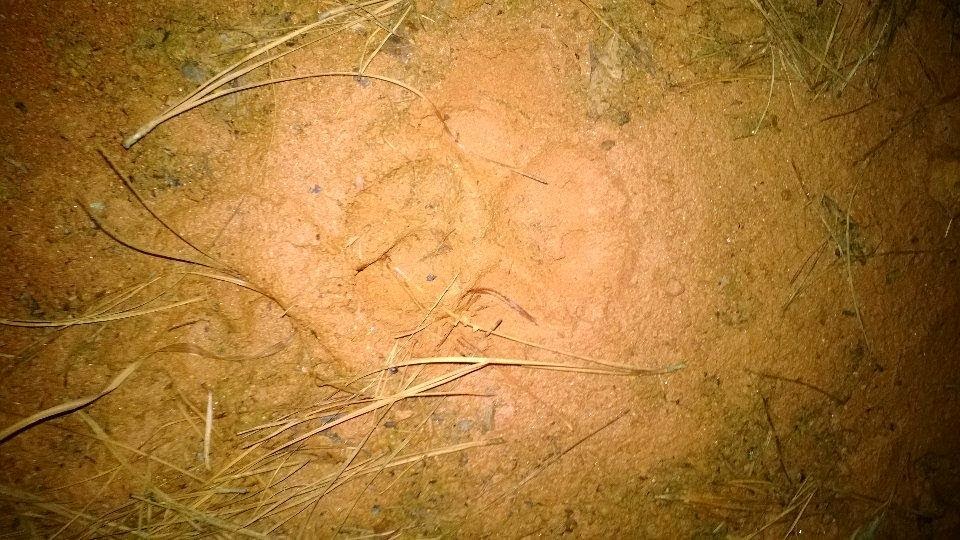 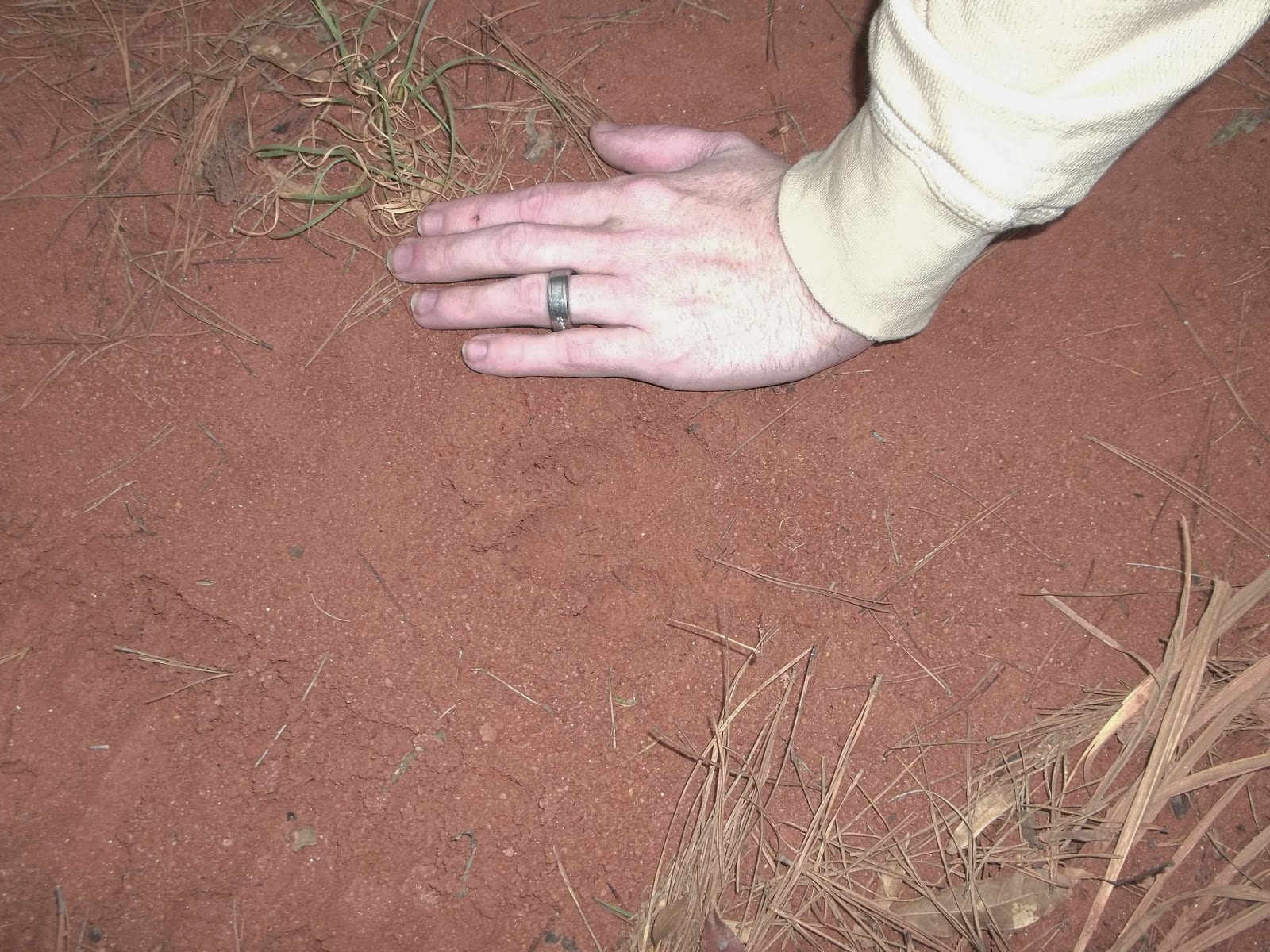 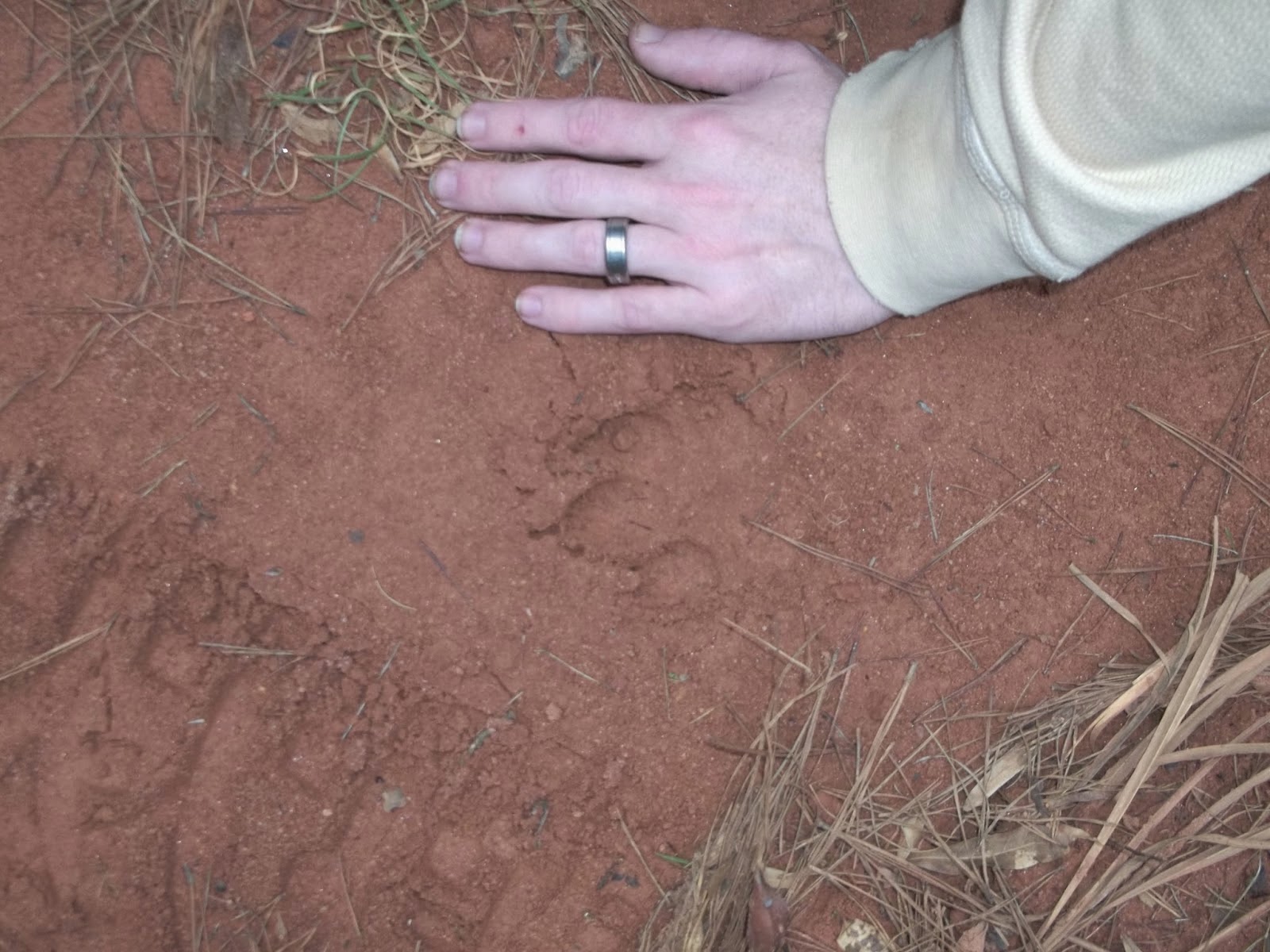 Posted by Carolina Cryptid Crew at 4:17 PM No comments: