I know that some of you, through our YouTube channel know that we took down some tree structures. For those of you that don't know, About a month ago, after not getting much activity, I sort of had a brainstorm. I wondered what would happen if I took down a few of the tree structures in our research area. Well, I ran this idea by the team and we decided to give it a try. We took down three or four structures, piling the sticks into a neat pile where the structure had been and leaving an apple with the stack of branches. The apple was placed inside the branches where something would have to reach inside to get it. The next day, the apples were all gone with no signs of what took them. No bites of the apple were left laying around, no core, just completely gone. We left things as they were and decided to give it a few weeks to a month without us going back into the woods. Let nature get comfortable again and see what happened. In the mean time. We were home in our own yard sitting outside every evening letting the grandkids play in the evening air. Just as the sun starts to set, the kids (2 and 4) are playing with the gravel in our driveway. This had become an evening ritual and went on for a few weeks. One evening something hit the storage shed that is adjacent to the woods that connects to our research area. My son, Chris and I go to see if we can find out what made this noise. While walking down to the edge of the yard I notice as we near the storage shed, there is a couple of small piles of gravel on top of the grass. There is no way the kids could have brought the gravel all the way down here. 1. They are not allowed that close to the woods. 2. We don't allow them to put gravel in the yard due to the lawn mower picking it up and throwing it. I stood just behind the gravel and looked up into the yard.  There were trees and bushes obscuring my view of where we sat in the evenings. Marty and Cari were still sitting there and I couldn't see them. Then I knelt down. I could see perfectly underneath a utility trailer to where my two grandchildren played in the driveway. I watched them for a couple of minutes playing with the gravel. To my amazement, they were making small piles with their hands. This both intrigued me and unnerved me. Chris and I walked behind the building to look around. The only thing we found out of place was a rock about the size of a baseball. I took this rock and wedged it inside two limbs of a tree just behind the building. For the next few evenings, my rock would be on the ground near the base of the tree. Ok, maybe an animal knocked it out. I built a small structure around the base of the tree. Wedged my rock back into place. Wedged another rock higher and then wedged a limb into the tree that touched both rocks at once. The next evening, the limb touching the two rocks was moved out with a Bluejay feather laying on top of the lowest rock. I took the feather and fixed my limb back touching the rocks. I went inside the house and retrieved some colored stones. Red ones and clear ones. I took them back out to the tree and lay them on a board in a straight line. Nothing other than my limb being moved happened for a few days, and then my rocks were moved! They were two red moved up, two clear moved down and so forth. They had been moved from a straight line to a pattern!So, I lined them all backup. After a few days, they were moved back into the same pattern. This made us think we may have an adolescent in the area. So about a week ago, every evening about eight o'clock we notice all of our dogs throw their noses to the air and point to a densely wooded area of our yard. Just to the right of this tree and stones. After seeing this, Marty and I decide to take a walk in the direction. To my surprise, we find a small print! This print is found in dried red clay. This stuff is as hard as concrete so there is no way any of us is heavy enough to create one ourselves. And it was found in some rough terrain that no one would be able to maneuver through with bare feet. But it leads into my theory of having a young one in the area.

If you have any questions, comments or even suggestions, let us know! We'll keep you guys posted! 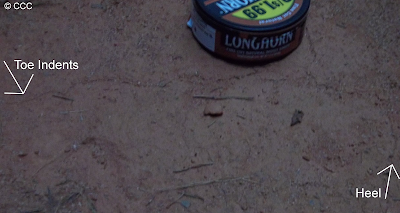 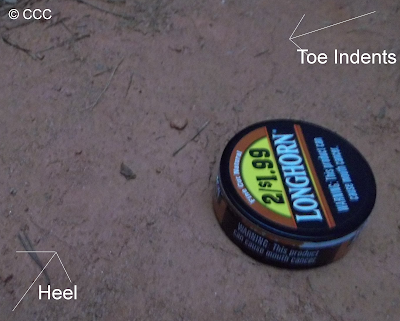 Posted by Carolina Cryptid Crew at 6:13 AM

This is so fascinating! I am looking forward to our next investigation.